On December 18, 2020, Vice President Mike Pence announced the name of the new U.S. Military’s Space Force is now officially – the Guardians. Of course, the announcement led to more questions than answers. For those of you following the 100 + year cover up of the UFO and extraterrestrial civilizations visiting Earth question, the announcement led to even more questions and even fewer answers. In this short blog, I will try to provide at least some answers to the more obvious questions.

For the Uninitiated, Encounters USA is about Aliens, Bigfoot and Dogman and the Government Cover-up that conceals the truth about their existence. Aliens and Space is part of our mandate.. Let’s get started by saying we have been covering these alien developments and the stories behind them for three years on our Deceptions of the Ages News YouTube Channel and for almost two years on Encounters USA Podcast, YouTube Channel.

For the sake of brevity, we will be skimming the surface of the Space Force, or Guardians. If you are interested in stories concerning the Secret Space Program, Oumuamua, evidence of past alien contacts, US government remote viewing of aliens, the Navy UFO disclosure and what it really means, etc. etc, please follow the links in the text. For a real understanding of the connections between aliens, Freemasons and Latter-day Saints or “Mormons” please read Deceptions of the Ages “Mormons” Freemasons and Extraterrestrials.

If you haven’t seen the hit movies Guardians of the Galaxy, you probably should at least get the Cliff Notes on them, otherwise this part of the blog may be hard to follow.

In an NPR article the Space Force is quoted saying, “The opportunity to name a force is a momentous responsibility,” Space Force said. “Guardians is a name with a long history in space operations, tracing back to the original command motto of Air Force Space command in 1983, ‘Guardians of the High Frontier.’ “

Of course, with a secret budget worth trillions of dollars spent on who-knows-what, the need for outside funding by the Marvel Comics Corporation is completely unnecessary, as long as the Chinese and the Saudis are continuing to finance our debt. However, does that rule out some unscrupulous bureaucrats, military officials and politicians taking some payola or a position on a board as an advisor with the movie makers?

Let’s just say it happens all the time, but we’ll have to wait and see if Trump and Pence end up on the Producer credits of the next Guardians of the Galaxy movie to know if this theory has any credence.

According to an article by Jim Garamone in the DOD news, “The Trump administration championed establishing the U.S. Space Force culminating in the legislation signed Dec. 20, 2019, that formed the first U.S. armed force since the Air Force was established in 1947.”

Is the new Guardian Space Force gearing up to do battle with an alien civilization like in that movie Independence Day, Mars Attacks or Plan 9 From Outer Space?

According to the Vice President, the focus of the Gaurdians is to be watching for earth-based sources, not threats from space.

“We’re leading in space, but our determination … is to stay in the lead to defend America and defend our freedom from [the vantage point of] space,” he (Vice president Pence) said. Of course that leads directly to our next question.

We’re Guarding Against Who?

According to the DOD article, it is to guard agains the threat of the Chinese and the Russians.. If you aren’t up on current affairs, China is the country we buy everything from.

Thanks to their cheap slave labor, inefficient government and human rights abuses, the Chinese can afford to finance the US Government through the purchase of our debt.

Furthermore, they have enough left over for their own space program, with which to threaten us by knocking out our communication satellites.

Then there is Russia. The Russian government was created by world banksters to conveniently serve as the role of bogey-man whenever multinational corporations or politicians need a convenient enemy for a lucrative war, military defense program, to clamp down on civil liberties or to impeach a sitting U.S. President.

It is these two countries whom we must be on guard against. If this makes even less sense than naming the Space Force after cartoon characters, please read on.

Who will be a part of the Gaurdians? Will there be room for anyone but Kirk Douglas’ love child, a blue bodybuilder and Groot? What about me? I was a lifeguard all through college, how much of a stretch is it to see Matthew Heines as a Life-Guardian?

Apparently, more a stretch than the military is willing to make. The Air Force is looking for tech savvy individuals to make up what it calls a lean, mean force. According to the DOD:

What countries will make up the Space Force? At this point, not Russia and China, but somehow I expect that will change if China Joe Biden gets in the Oval Office.

Is there an imminent threat to the US or mankind from space?

According to the Department of Defense, there is an imminent threat. It’s not from space, but from the previous mentioned countries of China, Russia and their minions. Of course many of them live in the United States where they work for our tech firms.

Of course many of them live in the United States. They work for our tech firms and funnel billions of dollars in stolen technology out of our country with the blessing of their minions in Congress.

The American taxpayer of future generations (or Marvel Comics) is footing the bill for the Space Force or Guardians.

Meanwhile, the people they are guarding us from are here stealing the technology we are spending money on to guard us from them.

What’s Waiting Out There?

The next few questions are for those who follow the alien disclosure movement. They are based upon testimony given in 2001 by dozens of military and government officials regarding their knowledge of extraterrestrials, their craft and the fact the US has their own re-engineered craft.

Donna Hare, a former NASA employee, gave riveting testimony at the Disclosure Conference about Dr. Werner von Braun. He said regarding the weaponization of space:

Nuclear weapons allow tears in the fabric of our dimension that allows things in we don’t want here.* According to Colonel Robert Salas, who was in command of missile silos in Montana in the 1960’s, the aliens don’t want us using nuclear weapons for a good reason.

If this information is credible, and it does sound and appear credible from the footage and the testimony of Col. Salas and many others: whoever these aliens are, they will never allow the weaponization of space and they have the technology to make that happen, or at least, not happen.

Will our Space Force members end up as Space Bacon for a Species of Space Reptilians?

Although we can Never Get a Straight Answer from NASA, we can go to one US Government sponsored source to find out what is out there.

Our trusty government was lying to us before. But now, they seem almost too eager to tell us something is amiss in the dark skies. Hint, it ain’t Santa Claus and eight (or nine) reindeer.

Remote viewers like Ed Dames, Joe MacMoneagle, Ingo Swann and a number of others have remote viewed the solar system and they have found that there are and have been civilizations on mars, the moon, Iaputes and others. Many of these civilizations existed millions of years in the past. Some were humanoids, some were not.

What will happen when a Gaurdian points his space laser at one of these alien species from his floating tin can? What happens if the laser is sitting on earth? We can only point to the number of US pilots who have died chasing after UFO’s to estimate a possible outcome to these scenarios.

The Dance of the Cosmically Stupid

Has the world taken another step in the Dance of the Cosmically Stupid? Our pay-for-play politicians are really employees of the military industrial complex and the world’s multinational corporations.

Hint: Look at this photo. A bunch of supposedly rationale adults are getting ready to fight a war in space. They are wearing masks because their enemy has already destroyed their society and freedoms with a biological weapon.

* Watch this video on the Skinwalker Ranch for more information about the Government’s investigation into this portal and the things they found.

** Watch my upcoming video on the Vector symbol on NASA and corporate logos. Whose team are we on?

Trumped! In A State Of Hate on Vimeo

Looking For Something Sweet?

One of Our Favorite Brands

Matthew Heines is an author and veteran of the US 82nd Airborne Division with over twenty years of experience teaching in the USA, the Kingdom of Saudi Arabia and the Sultanate of Oman. Matthew Heines has six books currently in publication titled, My Year in Oman, Another Year in Oman, Killing Time in Saudi Arabia, Deceptions of the Ages, The Rainier Paradigm and Heinessights: Wisdom for the Ages. Currently living near Seattle, in Washington State, Matthew Heines is active in politics and has run, and is currently running for the US House of Representatives.

A Thousand and One Arabian Nights – American Style 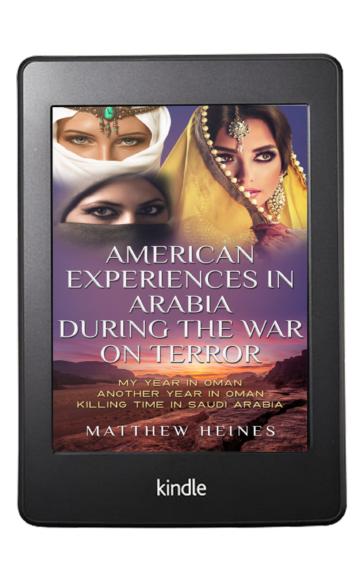 Matthew Heines is an author and veteran of the US 82nd Airborne Division with over twenty years of experience teaching in the USA, the Kingdom of Saudi Arabia and the Sultanate of Oman. Matthew Heines has six books currently in publication titled, My Year in Oman, Another Year in Oman, Killing Time in Saudi Arabia, Deceptions of the Ages, The Rainier Paradigm and Heinessights: Wisdom for the Ages. Currently living near Seattle, in Washington State, Matthew Heines is active in politics and has run, and is currently running for the US House of Representatives.

The Rainier Paradigm by Matthew Heines 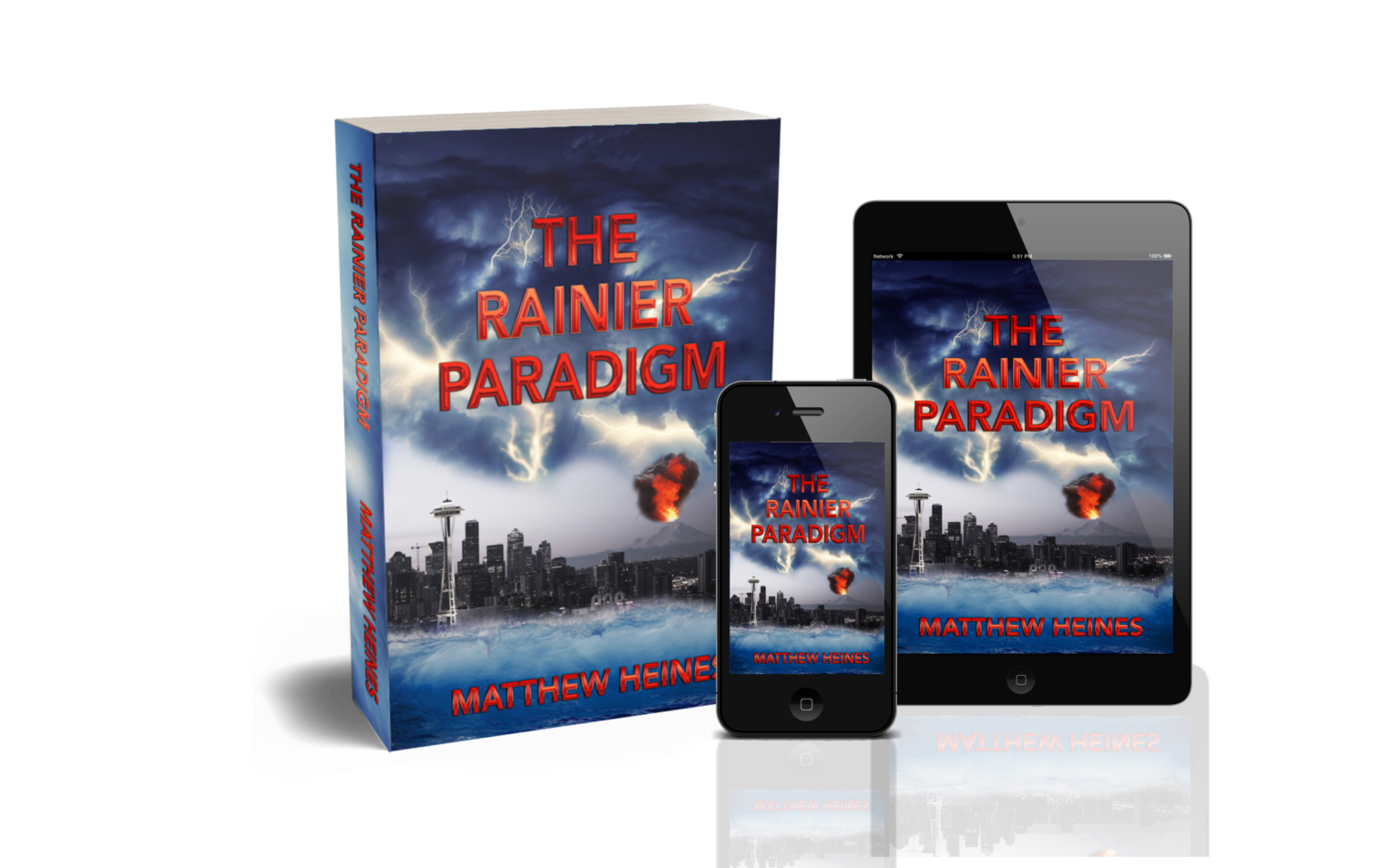 Not suspecting that she may have been sent to the country for the specific purpose of infiltrating the Federal Investigation Bureau, the F.I.B. offered her U.S. citizenship if she would work for them. When she waffled, they added visas for her family, money, scholarships, even a Dingleberry’s hamburger franchise on Aurora Avenue in Lynnwood before she finally agreed.

Matthew Heines, the Matthew, the Myth & The Legend

"Sure, you can read other books, but will they be this good?"Matthew Heines

Before You Enter Our Gift Shop

“Kyle and Montra both emphasized the activity is not solely concentrated on the property now famously known as the Skinwalker Ranch. Paranormal activities are ongoing.”

Whether you live in the Northwest or Timbuktu, you are going to find the Rainier Paradigm is a novel that tickles your intellect and your funny bone at the same time.

Just like God, Jesus Christ and the Holy Spirit, the Higgs Boson and X particle exist almost independent of the laws of physics as we know them.

From Books to Politics to Bigfoot It’s the Heinessight Blog

“Kyle and Montra both emphasized the activity is not solely concentrated on the property now famously known as the Skinwalker Ranch. Paranormal activities are ongoing.”

Whether you live in the Northwest or Timbuktu, you are going to find the Rainier Paradigm is a novel that tickles your intellect and your funny bone at the same time.

Just like God, Jesus Christ and the Holy Spirit, the Higgs Boson and X particle exist almost independent of the laws of physics as we know them.

Something else to consider